One day before the official end of NaNoWriMo and I’ve finished! I am now officially a NaNoWriMo winner! Yay me! Yet, this victory feels bittersweet after what I’ve been through this past month. I am very glad and proud of myself that I finished, but at the same time I do think I pushed myself a bit too hard. As you could read before I had my doubts about the quality of my work and whether I was still doing the right thing. At the same time this is a major accomplishment. So, let’s have a look at the good, the bad and the ugly parts of NaNoWriMo as I share my full month’s experience with you guys.

I wrote a total of 50.192 words for my next novel during NaNoWriMo. That’s a lot of chapters added to my story, which now counts thirteen chapters and is around 60% done now. I think the story will be done in twenty chapters total. So, that means that I have about seven chapters left to go when I finish this one. A very nice boost!

Writing every day has also given me a bit more discipline, perhaps, to keep doing it daily, although there rarely is a day that I don’t write. It has taught me that writing and pulling through is important. And that feeling of pride and accomplishment is really great!

Finished before the official end! 😉

I already said it during my last update that I was hitting that wall. What NaNoWriMo has taught me is that it’s really hard to put down 50K words in a month! It doesn’t really help that I have an a fulltime job either. So I had to do all of my writing during the evening, after I had already spent an entire day at work. I think I would have found it way easier to do all of this if I were a fulltime writer 😉

Another thing that really bothered me was that I was feeling mentally drained and my creativity suffered a lot. Being forced to write doesn’t mean you’ll be putting the best possible you can on paper. At least to me, it often felt like a chore. Especially during the last weeks. 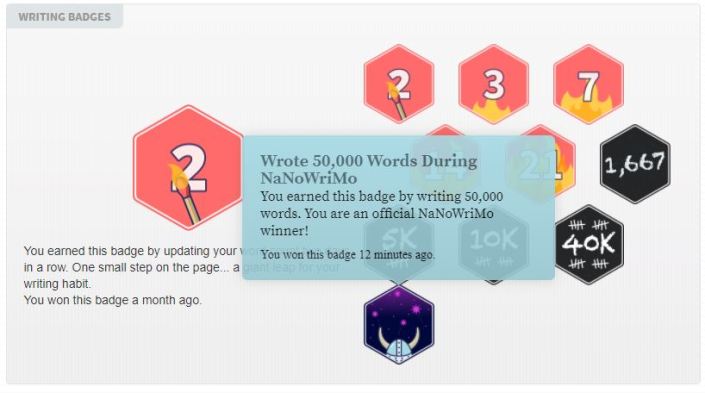 The funny thing is that NaNoWriMo wants you to believe that your novel is now done. I wish that were true, cause although this 50,000 word boost was definitely the largest part of the book, I’m far from finished. That’s why I suppose it didn’t really feel like a major victory when I finally earned the badge. It’s bittersweet, but I suppose that serves me for being a very mean writer for my protagonists 😉

Another consideration I’ve made is that although I found this whole experience intriguing and am glad I finished, I don’t think I’ll ever do this again, unless I’ve become a fulltime writer. It’s just a bit too much stress if you’re trying to do two jobs at the same time. 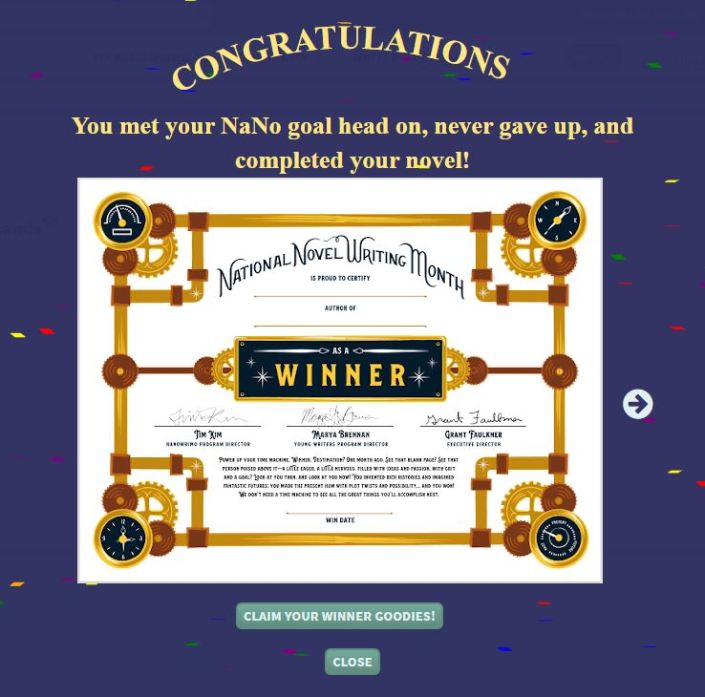 If only it were true that I completed my novel, ha!

So, there it is… I did something I’ve never done before and this whole experience will always be part of my life now. I know I can do it and write 50K words in a month if I want to! Do I ever want to again? Hell no! Hahaha.

This is me signing off from NaNoWrimo! 😉