Working towards an End

It’s the last week of NaNoWriMo and I can tell I’m really hitting the proverbial wall that marathon runners also experience. Once you’re over that wall, you’ll do just fine. The past few days I’ve been crippled by doubt and I feel mentally drained. No worries, I’ll make it through, but once this month is over, I’m going to take a little breather and tune my daily writing back to 500 words a day. Today, I wanted to give you some insights I have gained over the past month, but also how my writing process goes. 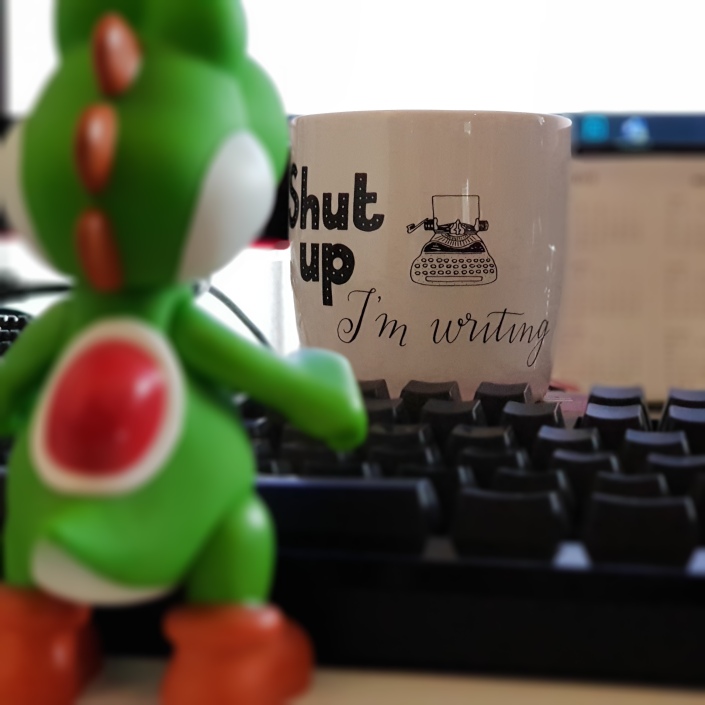 Brainstorming so hard it hurts

Before I even start writing my mind can be occupied with new stories and I’ll make notes on the side and see if it will develop into anything I think could be potentially a really good story. The one I’m currently writing I’ve been carrying around with me for two years I think. When I was finishing up The Xoron Redemption I wanted to work on this wacky fantasy story I’d been thinking about. Combining elements of movies and series I love, like The Big Lebowski and Breaking Bad, but in a classical fantasy setting with gnomes, dwarves, orcs and everything else I just love about fantasy. I had so much ideas and as it goes, you’ll always end up scrapping a lot of them, so the really good ideas can shine. That’s how brainstorming works, I suppose. Not all ideas work 🙂 And some can be put to use later on, when you’re working on new material.

A start and an end

The key component for me to start the writing process is that I have to know where the story starts and where it ends. Everything in between will present itself logically as the story progresses. I’ll also do plotting for every chapter and most of the time I’ll do that five chapters in advance, then sit down and write the chapters and go back to the drawing table to check if I’m still progressing nicely and, this is the most important thing, if I’m still working towards the end! Sometimes you can get really sidetracked and there might be stuff you want to write about, but that doesn’t necessarily mean it will add a lot to the story, nor that it will interest your readers much. Thankfully I can rely on a steady group of proof readers to tell me if the story is working, or not.

It’s almost the end of NaNoWriMo and although I’ll be doing a final update on it later this week, I did want to share this with you already, because it’s been bothering me a great deal and I have come to a point where I no longer enjoy being forced to write so much every day. I need about 4K more words now to win NaNoWriMo and I will win, that much is sure, but I am slowing down from writing 1.7K words every day now to 1K. The most important reason for this is that I feel that I’ve lost some of my shine when I’m forced to write and also because usually I take way more time to think before I sit down and write and I have a clear idea what I’m about to write. I haven’t experienced that in about a week now and as a result doubt has been gnawing its way into my mind.

A certain bounty hunter is making sure I write every day 😛

As I said, usually when I write I have a clear mind and know what words to put on paper when I sit down and do my thing. But when I was telling Bren about what I had written and how the ending was supposed to be she wasn’t as enthusiastic as I had hoped and I already had ideas to make the ending a whole lot better. Granted, maybe I just didn’t convey the ending very well, and I tried not to spoil her reading experience too much, by leaving out a lot of details and a couple of spoilers, but still, I had this nasty feeling of doubt creeping up on me. Not cool. This was one of those times when you reflect on your work as a writer and you think it’s all shit. But at the same time, Bren’s reaction also gave me the insight I needed to know that I had perhaps lowered the bar for myself and she has the fantastic ability to lift me to a higher level and that’s what I’m going to aim for.

This story deserves to be the best it can be and I’m only in the draft phase now, so I’ll be doing a lot of rewriting, with her feedback in mind. This is the first novel I’m writing since Bren moved in with me, but I have to say that it really does help if you have someone who fully supports you and wants to help you to write the best shit you can. That’s most certainly what’s keeping me going now! Time to get over that wall and win NaNoWriMo!