Last week was quite a ride. As you may have noticed, I hadn’t posted as much as I have earlier and with good reason. On Monday the 13th of June, after I got back from work I got a phone call from my stepmother to inform me that my dad had been hospitalized, due to a myocardial infarction. Apparently he had suffered from chest pains over the weekend, but had thought (too) little of them and had taken a few naps, after which he felt better. Monday was a different story, however, and while working he got the same pains in his chest again and called up Christine (my stepmom) to ask her if she could make an appointment with the doctor for Wednesday(!). Of course, the doctor said that he didn’t trust any of it and ordered him to come the same day, after which he was immediately hospitalized.

I’m not downplaying the fact that my dad had an infarction, but heart problems are common in our family and I wasn’t shocked that this happened to my dad. Still, it was quite a scare when it does finally happen, but at the same time I knew my dad was in the right hands in the hospital, which was a really big relief. Also, the infarction that he suffered was said to be a minor one. I think that was the biggest relief of all.

Last Friday my dad finally made it back home, after spending nearly a week in the hospital and he had surgery done and he had two stents placed to widen the arteries that were narrowed. The whole week was kind of a blur in between trying to get work done, visiting my dad and keeping up-to-date on his whole situation.

Making sense of all the paperwork

The amount of information you receive from the hospital after surgery and getting your medication is quite staggering. Most of the information your receive during such a stressful time fails to stick, because it’s such a massive overload and people tend to forget half of what’s being said to them. So, last Sunday I went to see my dad and help him and Christine out to make sense of all the paperwork and to help him understand how he’s going to have to change his lifestyle, going forward. A lot of the luxuries that he could afford himself earlier, can no longer be afforded and he will need to have a healthier diet and more exercise.

There’s a lot of medication that my dad has to take now, so figuring out what the side-effects of them might be and when he should warn the doctor was also very important. After I told him all that, we set alarms for him so he would be reminded to take them and we created a short To-Do list, because he also needed to make a few appointments for aftercare.

One thing I’ve been really grateful about is how medical science has progressed in such a way that the surgery for my dad wasn’t as invasive as it would have been say, twenty years ago. They placed the stents by going into his artery in his wrist. I didn’t even know this was possible, until I heard it last week. It’s just not something you keep yourself busy with, when it doesn’t really concern you, I suppose. I’m just really grateful that my dad is safe once again and that he can now focus on recovering and adopting a new, healthier lifestyle, so we can enjoy his company for years to come. 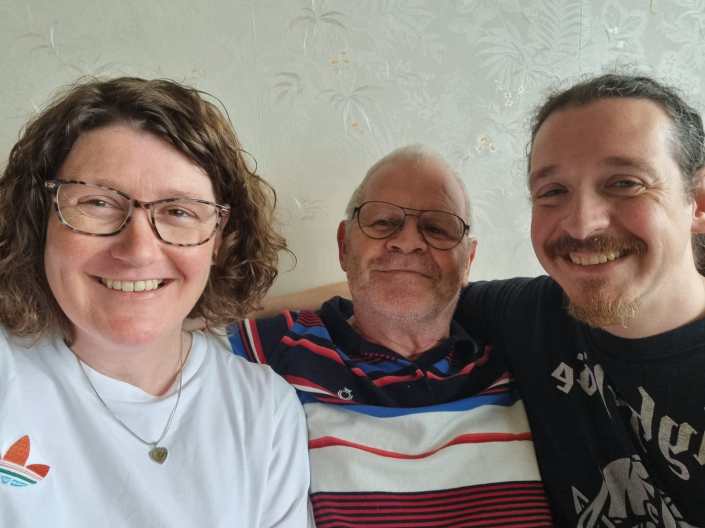 Here’s a picture of my sis Marsha, my dad and me we took last Sunday.

I’m also grateful that my Stoic lifestyle and daily meditations are having a profound effect on how I dealt with this situation. I never panicked after hearing the news, I never worried about the outcome (mostly because I knew my dad was getting great medical care here in the Netherlands) and overall I didn’t overthink the situation at all. I think this is a testament to my overall development over these past few years and how I deal with life in general now. It’s definitely not easy having to deal with situations like these, but looking back at how I handled it, I can really tell I’ve grown and that’s something to be proud of and something I want to share with readers of my blogs.

Now it’s time for my dad to change his life in a positive way and to adopt a new lifestyle. But I’m sure he will manage, with the right guidance.

I love you dad,