It’s Monday again and here we are, after an exhilarating weekend! Weird how after I had gained so much inspiration and energy from the weekend, that I felt it drain away today, because it’s a work day and I had to face the reality that today I’m still at home. Bren asked me what was going on my mind and I told her I still don’t feel comfortable being home to rest, because I needed to be guarded from myself for the time being.

It’s weird, because I’m not used to this at all and perhaps no one in my position feels like they are. The energy I had gained from the weekend just seemed to evaporate, because during the work days “real life” happens. Strange how that is wired into my brain.

A week at home hasn’t done me much good yet. I feel restless and uncomfortable being home for the reason I am. I’m not physically sick, but mentally I feel drained. What was really strange was how much stress a single message from work could cause me. It took me perhaps fifteen minutes to send a simple reply. And even then my mind was filled with doubt about whether or not I had sent out the right reply, or not.

If there’s one thing I do know it’s that I am filled with inspiration right now. Perhaps a nice side effect of being a little down. I know that this situation is just temporary, but still, having never been in it and now being close to, or even in a burn-out, it’s weird. As Bren said, these things just happen to you and all you can do is pull through. Another nice side effect is that it has given me a deeper understanding of how hard some things can be for her. But we’re managing, together and that’s what really matters. Things will get better and eventually we’ll look back at all this as a turning point, before things took a turn for the better. 🙂

So, last weekend was great. I was part of a scifi/fantasy panel for an event by Godijn Publishing and it gave me so much energy and inspiration! Originally the panel was supposed to be four writers, but there were some changes to the line-up, because of the Corona virus outbreak and another emergency case. So we ended up doing the panel with three writers instead. Patty van Delft, Ellis van Zijl and me! 🙂

It was so much fun answering the questions people in the audience had for us! Even some really touchy subjects, like diversity and how things like discrimination should be handled in a story. I suggested that perhaps we weren’t the best demo-graphical group of people to ask, but still, I always hold equality in high regard, especially in my stories. We also talked a lot about world building and how important it is to write something that will enable your readers to believe in your world. In other words, to not break their suspension of disbelief. 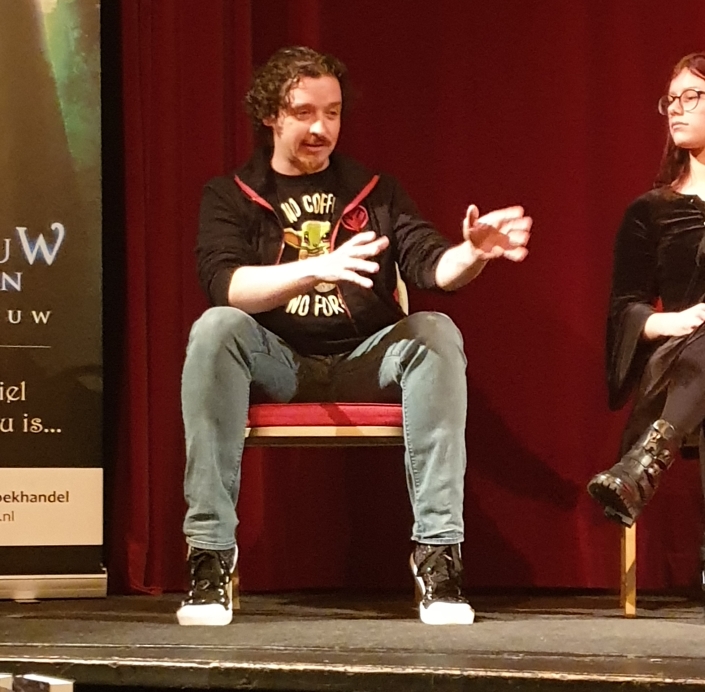 Here I am, on stage, telling people what scifi and fantasy means to me! 😀

I was really happy with the opportunity I was given to do this and I really hope to be doing more of this, because it was one of the best experiences I’ve had in a long time. Being on stage is always a thing I like and talking about my favourite subject even more so! This is a day I will long remember and it’s given me that nudge I needed to start writing my new novel, which I will be working on starting today!

So all in all, that’s where I stand right now. I really need to get the idea out of my head that being home now is a bad thing and focus on what gives me energy. And that’s what I’ll be trying to do, with a little help from Bren to push (or pull) me in the right direction!