When the internet was without Facebook and other social media platforms, I used to be a member of various online forums and frequently visited various chatrooms. Back then terms like internet trolls and clickbait weren’t invented yet, but still there were tons of trolls out there and I fell for their tricks so much. Usually with a fair amount of raging on my part as a result. You could call this naivety, which was definitely part of the story, but not too long ago I did some reflecting on my online behaviour and noticed there was a trend that I just wanted to be right. Especially, because I knew what I was saying was true and people were just trying to troll me. In hindsight I should have ignored them, I should have just let it pass over me, but I couldn’t for some reason.

Apparently, being right was (and arguably still is) one of my core values. I always try to be well-informed on subjects I care about and try to be knowledgeable about a lot of stuff. Sure, it’s impossible to know everything and always be right about stuff, but how much does it really matter in the grand scheme of my life? Spoiler alert: It doesn’t, really. When I started realising this, I tried to change my behaviour online as well. Because if there’s one thing I have learned about the internet it’s that your friends on Facebook are mostly people who will already agree with your point of view, and the select few who don’t won’t be persuaded to change their opinions, even if you have fact-based evidence to prove them wrong. You just don’t have that much power to change people’s opinions, especially if it touches their core beliefs and if it’s just something that’s written on someone’s wall on Facebook.

They may be wrong, Luke, but that won’t change their mind 😛

I think it was about half a year or so ago that I decided to try and no longer indulge in the useless activity of online discussions. How successful do you think I’ve been thus far? Not very? Well, I have to admit that this is still a pitfall. For instance, last weekend my girlfriend posted an image with the patent of a toilet roll, just for fun. But the amount of senseless discussing that went on after that was a perfect example of why you shouldn’t even bother to reply. Even with the evidence plainly laid out in front of people they’d argue about how to hang a simple toilet roll.

There’s been tons of discussions or posts where I simply couldn’t resist to reply, because I was compelled to do so. I’m glad I came to the conclusion that it’s quite pointless to spend my precious time on stuff like this, but it takes a lot of willpower for me to ignore topics like this, sometimes. Especially if they’re about stuff that’s close to my heart (and thus my core values). In fact anything that challenges your values is likely to trigger a reaction in you, but it really helps if you ask yourself these questions:

Usually the answers to all of these questions will be a “No”, unless people are asking for an expert opinion on a subject you’re well versed in, you’d better steer clear and just be on your way and enjoy the rest of your day. Or face the consequences of being dragged into a troll’s cave.

Some friendly banter is never a bad thing, especially if you know a person very well and you know they’re probably just pulling your leg. But one of the downsides of the internet (or chat/text messages) is that you can’t interpret someone’s true intentions easily all the time. So, sarcastic remarks and teasing can backfire. Trust me, sarcasm is like a mother tongue to me and still people think I’m being serious on the internet more times than I can tell. Even when you use smileys like 😛 Which should be an obvious sign that you’re not being serious. Anyways, I digress…

Trolls; the real ones, who are probably sour people in real life too, because everyone’s against them, for whatever reason, are people you don’t want to feed. They find pleasure in making you suffer through writing coherent sentences, with fact-based evidence, and will then come up with nonsense that even they know isn’t true. 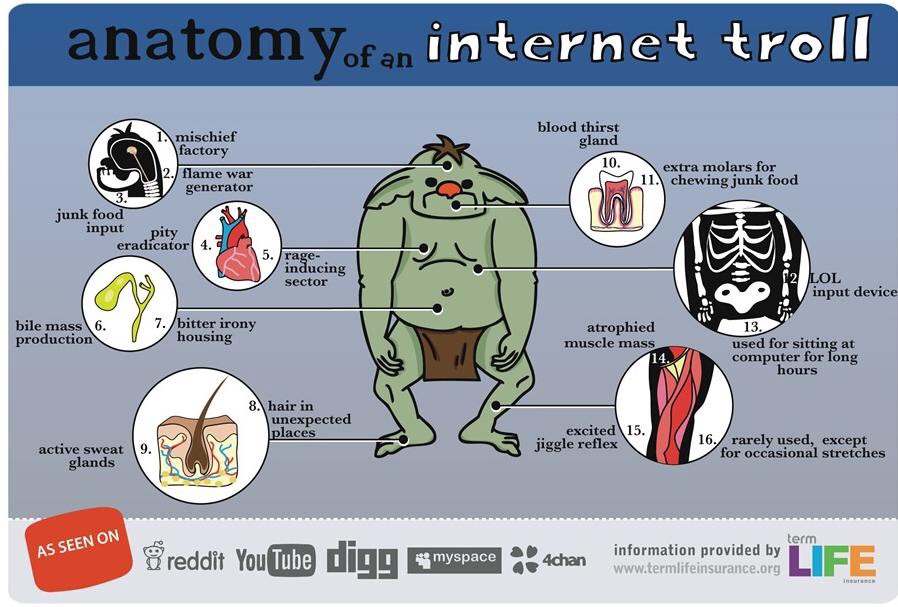 I’m wondering if I’m the only one struggling with this. They say that if you don’t want to be hurt, you shouldn’t write (or react). I don’t care if people think I’m taking this too seriously, but that’s part of my problem and it’s one I am aware of, which is why I’m trying to avoid these types of discussions online. So I don’t constantly think about how stupid all those idiots on the web are and how I can write some snarky comeback to win once and for all. It’s a path that leads to the Dark Side. And I’ve decided not to fall for it again, even though I’ll probably be tempted to do so every now and then, like an alcoholic who’s been sober for a year. But acknowledging a problem is half the solution. 😉

Have you ever run into trouble like I have online? Please let me know and share your stories! 🙂