The Disney LEGO line focuses primarily on the Disney Princesses and the minifigures are similar to those of the LEGO Elves and Friends line. They are slightly bigger, and targeted more towards girls. My girlfriend loves the Elves line, but she’s also a big fan of Maleficent and Beauty and the Beast. When I found this set online for only 35 euros I decided to get it for her as a gift. Last week we built the set together! 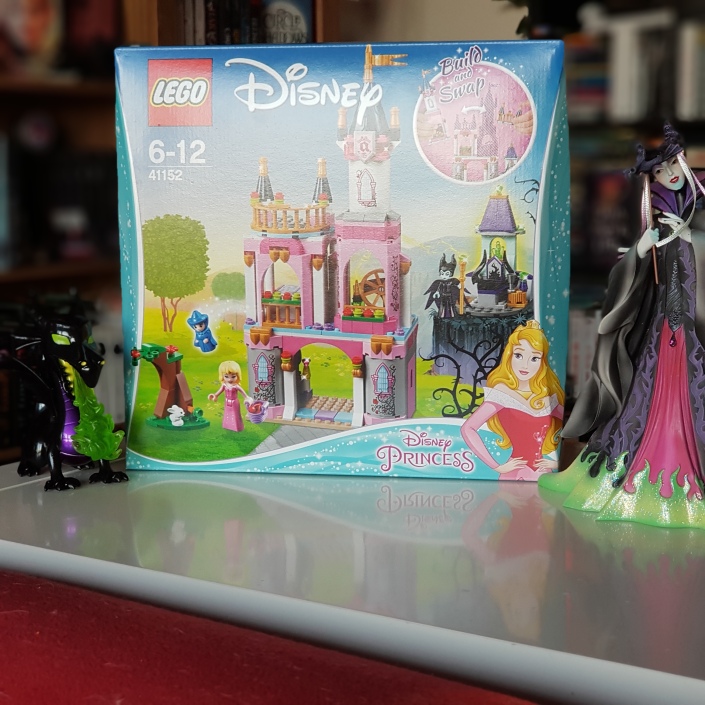 The box shows one of the many possible configurations in which you can have the castle. In this case the Maleficent part is displayed as a loose piece. When you open the box, you’ll find three large bags, a loose plate and the instruction booklet.

The first bag contains the base of the castle and a loose tree with a basket, and a rabbit minifigure. This bag also contains Sleeping Beauty, who is holding a rose. 🙂 There’s a lot of pink in this part of the set. 😛

The second bag contains the throne for Maleficent and one of the other fairies, and you’ll also expand the main castle a bit. The Maleficent minifigure is pretty much what we bought this set for and she looks great!

Of course one of our cats, Bobbie, decided to help us out with this set and she even teamed up with Maleficent. Evil little kitty!

The last bag contained everything that was needed to finish the castle, including the tower. After some shuffling around we ended up with the castle like this. Maleficent has taken control of the castle! (it’s still too pink though, haha).

One fun detail was this book that you can slide under Sleeping Beauty’s bed with “Once upon a time…” written upon it. 🙂

This set was quite a lot of fun to build. It took us maybe one and a half hours to build it. What I really like about the design is that you can combine this set with other castles to create one huge castle with interchangeable parts. A very clever design choice by LEGO. 🙂

We’re now waiting for some Maleficent specific sets, which hopefully will be released when the new movie comes out later this year!