Some things happen so fast that you barely register they’re happening at the moment itself. Last Friday was one of those moments. We were supposed to visit the vet with our beloved cat Mysty, our Clan Eldest. A couple of weeks ago one of our other cats had put a nasty scratch on her right eye and we had been treating it in the hopes her eye would heal. She was also given antibiotics, because she had become a little bit sick and had a runny nose, from which she had healed nicely in the past few weeks.

Sadly, the real reason we went to the vet wasn’t her eye. About two days before our appointment she had stopped eating and she was only drinking water. Normally she would practically beg for food at every opportunity, so we knew something was very wrong with our Calico lady.

Then Friday came and it will be a day we’ll never forget. We called the vet in the morning if it was possible to come earlier, because we knew that Mysty was really in a bad place. Thankfully, we could get an appointment one slot before our original one, so that was a relief. The wait until we could finally go just seemed to last forever.

Once we arrived at the vet, we were presented with the problem that only one of us was allowed to go inside. I had told Bren to go, because Mysty and she had shared such a long history and it didn’t seem fair to me to be the one to go inside.
“I’ll let you know how it goes,” Bren said.
“But if I ask you to come inside, you’ll know what time it is,” she added.
I watched her carry Mysty inside in the pet carrier and then a nerve-wracking fifteen minutes passed. People went in and outside of the building and I kept checking if I could see any sign of Bren and Mysty at the counter. Then a message from Bren.
Jeff, can you come?
And another
There’s nothing more that can be done.😭
I asked if I was allowed to come inside, but they gave permission in this case. 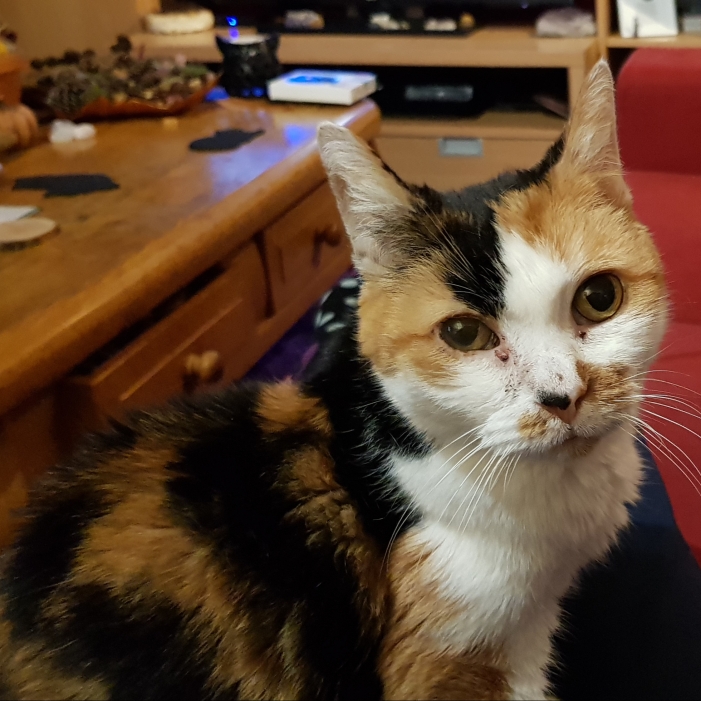 When I opened the car door, two other people were waiting outside to get in. They both turned to me and a woman with a dog asked me if I had to go inside as well.
“I’m afraid I have to go in. One of our cats is very sick, and I fear this is the end for her…”
I barely managed to keep my eyes dry, because I knew that this was the moment we had all feared.

I was let into the cat room. Bren’s eyes were already red from crying and Mysty was next to her in the cat carrier. She looked like she was ready to go home. The vet told me everything that was about to happen, but I think only half of it all truly registered at that moment. I could only stand there and nod, or mumble a reply.

Years ago I had a similar experience in this room, when I came to visit and pay my last respects to my first cat Kosmo. This time I was at least given the opportunity to say goodbye to Mysty. It all happened so fast. Bren and I were standing on both ends of the table and the vet gave her the injection. Mysty moved towards us, as if to say goodbye and we stood around her as she slowly dozed off. We kept petting her and telling her how brave she was. At one point I felt that she was gone and I told Bren.
“She’s stopped breathing,” I barely managed to say.
The vet had left us alone during this last goodbye and returned later. She then explained the next steps.

Mysty will be cremated and we’re going to keep her ashes in an urn fit for a Clan Leader. Our little girl will forever be remembered and she will be immortalised as Elder Mystpaw in my upcoming Kevar novels. I am dedicating the first novel in that series to her. It’s the least I can do for our little Mysty.

Rest in peace, little one. I’m glad you were part of my life. It was an honour and a pleasure.