Few villains have had so little lines and became such popular icons. Boba Fett is definitely one of these, beloved by many fans, including yours truly. A lot of people always point out that Boba isn’t that interesting a character, but to me he was always a bad-ass, and my opinion of him being that grew after reading the Extended Universe novels. He also played a role in the Clone Wars, which I thought was pretty cool too.

But what makes most of these villains so notable and memorable is, of course, their helmets. And LEGO has released four helmets in a new line, mostly aimed at a more adult audience. I mean, look at the box, and you can see that this is not marketed as a children’s toy. It even has an 18+ age recommendation on it, which I think is a bit odd, maybe.

The four helmets LEGO has released thus far are three from Star Wars and one from Marvel. The ones from Star Wars are Boba Fett, Stormtrooper and TIE Fighter Pilot. The one from Marvel is Iron Man. We’re seriously considering getting all of them, because Bren’s favourite Marvel character is Iron Man, and if Spider-Man wasn’t my favourite, Iron Man would be on the top of my list as well.

Inside the rather large box are five numbered bags with an assortment of large and small bricks. One thing you’ll notice from the image above is that the booklet is also stylishly black, which I really loved.

One thing that really stands out when building this set is the colourful assortment of bricks, of which you won’t see a thing once you finished the set. This does make it a lot easier to build the sturdy inside of the helmet and really helps to find the right bricks quickly. 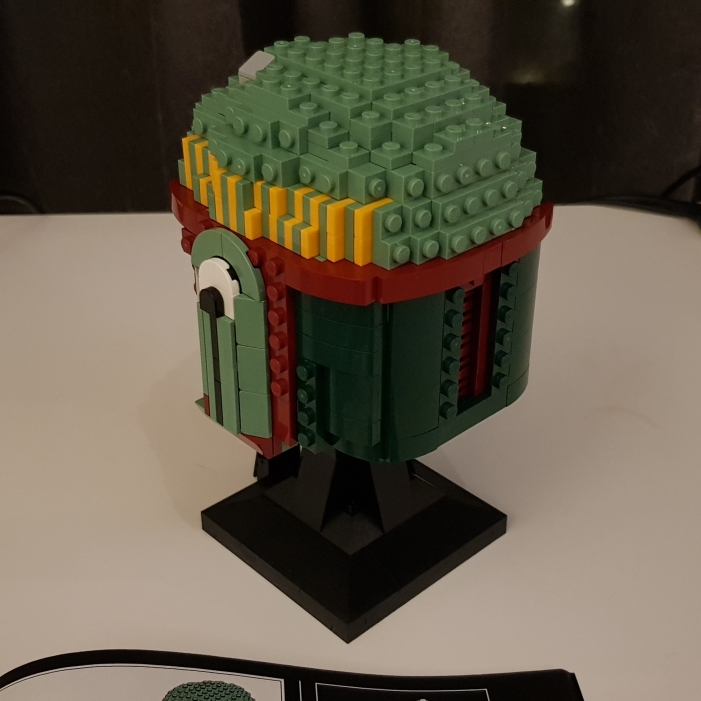 The way this set builds is a bit similar to the BrickHeadz line, but more complex. First you’re building the sturdy foundation, including the foot on which the helmet is displayed. After that you’re gradually adding to the outer layer until the helmet is finished.

I really loved building this set and the details are great. There is on big problem now; I really want to collect them all! In terms of displayability these sets are just awesome. The helmets are not size 1:1, of course, but they are quite big and great for any Star Wars or Marvel fan!

I managed to get this set with a discount. Otherwise they are a bit pricey, so that’s what I tried to reflect here in the scores.