Smuggler, thief, bounty hunter. All terms Lerion would rather not have himself called. Rather he sees himself as an entrepreneur extraordinaire. Never turning down a well-paying job, as long as the risk is high and the reward considerable. He’s a businessman first and will never turn down a good deal.

Said to live on the Saridion home world, he has been hiding from authorities of about a dozen star systems. Several of which who want him dead, or alive. The most notable of these being the death sentence he should be facing on Kevar Prime, for stealing the Jewel of the Silver Plains. Or kidnapping, would be a more appropriate term.

As a Gald Lerion was born with a keen business sense and a lust for riches. He stands about 1.40 meters tall, which is considered tall for his race. His skin is dark green, and his ears are long and elfin. He loves wearing the latest fashion, and always manages to create a striking image. He is often seen wearing goggles, or a monocle, allowing him to see everything throughout a wide spectrum. 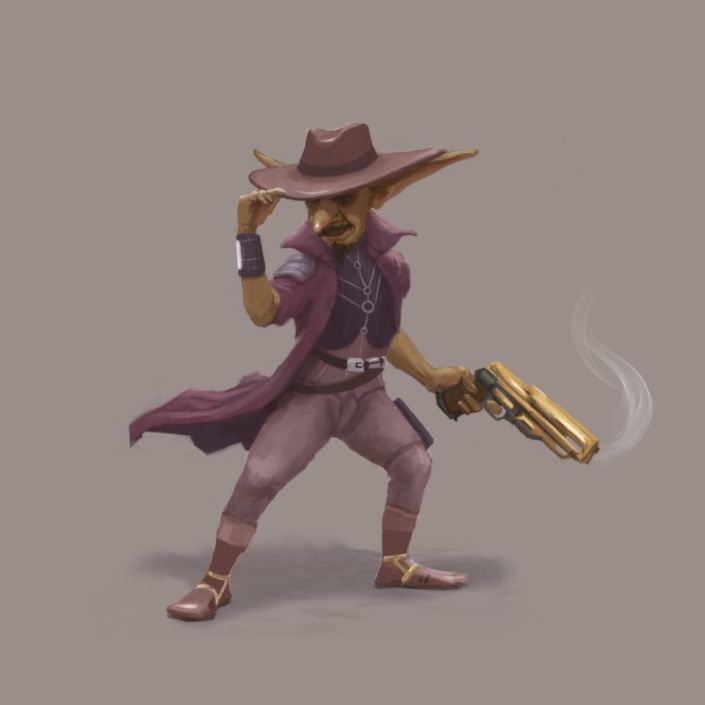 Because Lerion is involved in illegal activities, his Gald business privileges have been provoked, but Lerion did not prosper any less because of it. Obtaining wealth by exploiting the weak and willing to take high financial risks. This fact only angered most of the Gald who provoked his privileges in the first place, making them wonder about their own financial careers.

One of Lerion’s biggest loves is his ship, the Sly Maiden. A heavily modified freighter fitted with a fully functional slipstream drive, allowing Lerion to escape in the heat of battle. The name fits the ship perfectly. She’s elegant, fast and extremely hard to catch. She doesn’t have much in the way of weaponry but can stand her own against a squad of fighters and other freighters.

Lerion’s current known location is unknown, though it is said he is hiding somewhere on Saridia, planning his next big hit. If you happen to know his location, please report it to the authorities.

Lerion Prynn is one of the main protagonists in my Scifi trilogy “The Shaedon Resurgence” For more information on the books, please check this link: https://jeffreydebris.com/books/