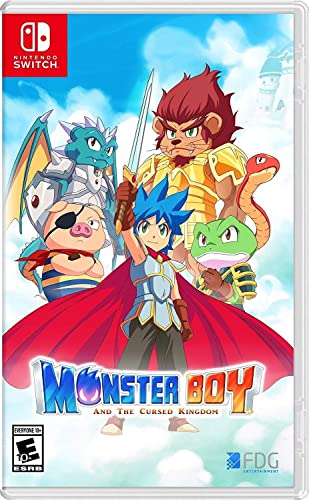 If you’ve been reading my Monday Musings, you know I’ve been playing Monster Boy and the Cursed Kingdom this past month. This game is the spiritual successor to SEGA’s hit series Wonder Boy and heavily draws inspiration from Wonder Boy III: The Dragon’s Trap, which I consider to be one of my favourite childhood classics. So, it’s no wonder that I had to give this game a go at some point and seeing it on sale on the Nintendo e-Shop not too long ago, I figured now would be as good a time as any to finally buy it and give it a go. But can Monster Boy equal or possibly even beat good ‘ol Wonder Boy? Let’s find out!

One of this game’s main selling points are the hand-drawn graphics and I have to admit, the game looks absolutely stunning and the multiple layers of foreground and background elements really add a lot of atmosphere to the game. The animations of the characters are smooth too, although it has to be said that the art direction for the game’s introductory movie and ending are different from the actual game and that did feel a bit odd, to me. The game also runs really smoothly on the Switch, both docked and in handheld mode. 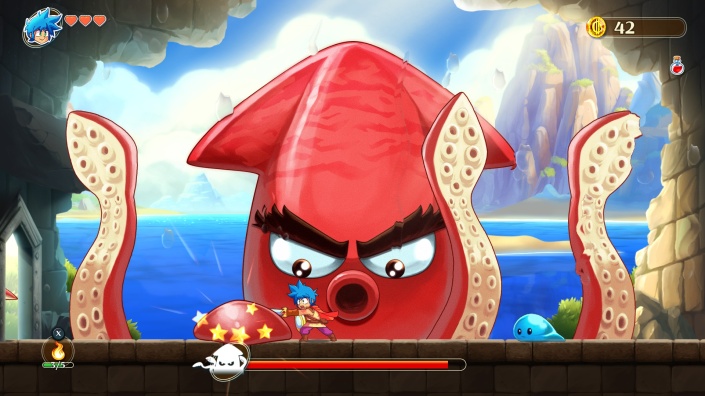 Just like its source material Monster Boy has the protagonist Jin transform in all kinds of different “monsters”. When the game starts your uncle Nabu seems to have gone mad and turned everyone into animals, but anthropomorphic ones, as they still retain their bipedal features. The same fate applies to you as he turns you into a pig that looks a lot like the old shopkeeper from Wonderboy III, including the eyepatch. Just like with most Metroidvania type games you start off with little in the way of skills and have to progress, collect gold and items, and find secrets in order to unlock your full potential. The game also features a large map and is filled to the brim with all kinds of secret nooks and crannies for the player to discover. 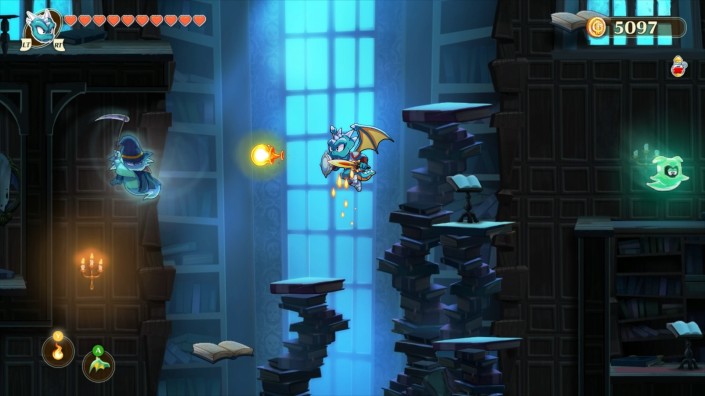 Fighting foes is relatively easy, with basic attacks and different types of magical items. Each form also offers several special abilities, such as dashing, flying, etc. I played the game on Normal difficulty and that was offering a nice enough challenge. The boss fights weren’t all that hard, after figuring out their patterns and weak spots. In fact I was more frustrated by several platforming segments that made me quit several times, because I tried too many times in a row. The game also features a lot of stuff that wasn’t in the old games, such as racing someone to get an item and several puzzles that felt more frustrating than satisfying to figure out. If those segments had been left out of the game I think I would have enjoyed it more than I did. That is not to say that Monster Boy and the Cursed Kingdom is a bad game, but it definitely isn’t on the same top-tier that I put Wonder Boy III. And perhaps that’s because I was definitely playing this game with my pink nostalgia glasses on and was in fact comparing this to my beloved classic WB3, but if a game calls itself the successor to one of the best platform games ever made, you have to be really good to make that promise come true.

Now, let’s take it a step further with the comparison. Wonder Boy had five different forms, besides his Human self. The order in which you attain these are Lizard-Man, Mouse-Man, Piranha-Man, Lion-Man and Hawk-Man. Each form offers different ways to progress through the game, with Mouse-Man being able to stick to checkered walls, Piranha-Man capable of swimming in every direction, Lion-Man giving you the ability to do a large slash that allows you to break blocks beneath you and finally Hawk-Man giving you the ability to fly, which allows you to reach the final level in Wonder Boy III. 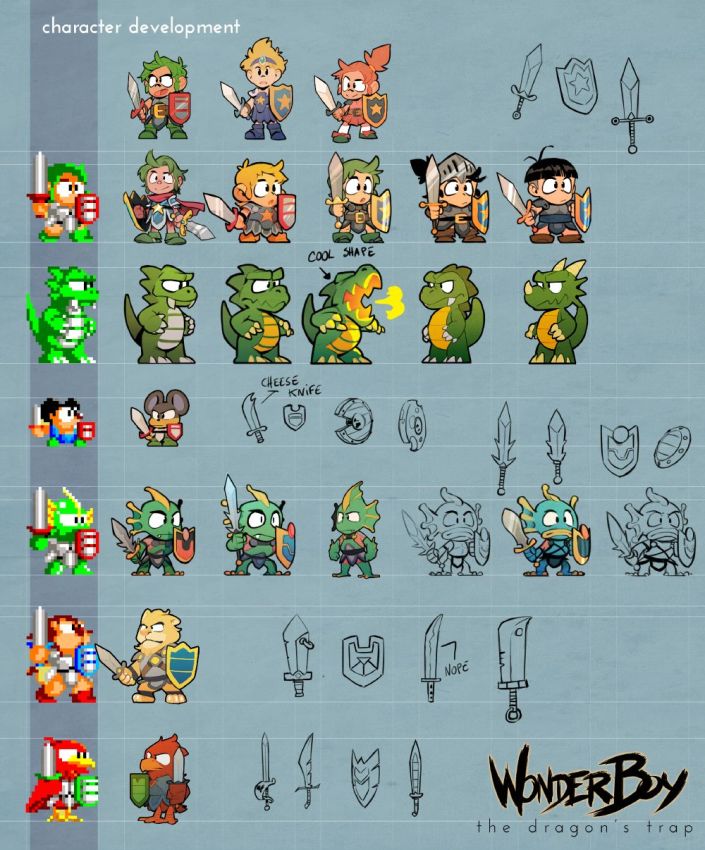 Now, let’s compare these to the various forms in Monster Boy. There’s Jin in his Human form, then there’s Pig, Snake, Frog, Lion and Dragon. I tried looking it up, but apparently they dropped the “man” part from each form. Basically, each of these forms are a bit like their old counterparts and the only one that seems to have survived is the Lion form. But one thing that kept nagging at me was that each of these forms, while they are cool just don’t match up with those from Wonder Boy. The Pig replaces the Lizard-Man, but lacks the firebreathing and can instead “sniff clouds” to uncover secrets and hints. The Snake replaces Mouse-Man and gets an acid spit, instead of a regular attack. But the “stickiness” of the Snake form also feels odd and I nearly threw my controller through the TV during one of the last segments of the game where you were forced to complete really weird ass looking segments in each form (see screenshot later).

The Frog replaces Piranha-Man, who could only swim in all directions. The Frog form also allows you to use his tongue to eat certain enemies and to swing from hooks and such. These segments where you had to swing from hook to hook were often quite infuriating, playing with rhythm only to distort this at the last few jumps, which became tedious and predictable (but still caused you to miss, because you couldn’t anticipate it either). The Lion is also different in this game in that he can now dash and subsequently run over water and lava because of his speed. The dash is reminiscent of Wario’s dash in the Wario Land games. And finally we have the Dragon form, which is a mix of Lizard-Man’s fire breathing and Hawk-Man’s abilty to fly. Overall they all just felt not like what I wanted them to be and I think it would’ve been much better if the creators had actually just stuck with the original forms. I understand the need for some change or innovation, but why change a winning concept. right?

The game’s soundtrack draws heavily on nostalgia and I have to admit that that’s just a really good thing. The songs are great and some of them are real bangers, like Skull Rock Beach, which is instantly recognizable if you’ve played WB3. These and many other songs are rehashes of the old games, but fortunately there’s enough room for original new songs and they always fit the levels really well. The only drawback that I experienced is that the songs replay from the start when you lose a life and that means that if you’re stuck in a particularly rough part of the game, you’ll end up hearing the start of every song over and over and this gets old really fast. I know more games suffer from this, such as the Super Mario games, but for some reason I was more annoyed by this when I played Monster Boy.

Overall The Game Atelier has done a solid job of setting an atmosphere with the combination of the art direction and the songs complement each other well. You really get that adventure vibe that you used to have as a kid. So, in that aspect they’ve done great. The only thing I really didn’t get was that towards the end, during the final dungeon they suddenly introduced a vastly different art style where you control 3D 8-Bit looking models of the monsters and this just felt so out of place I was literally facepalming at this odd choice of art direction. It just didn’t make sense from a story telling perspective either, in my honest opinion. Take a look for yourself. It’s so out of touch with the rest of the game’s aesthetic. I hate it and it makes zero sense. 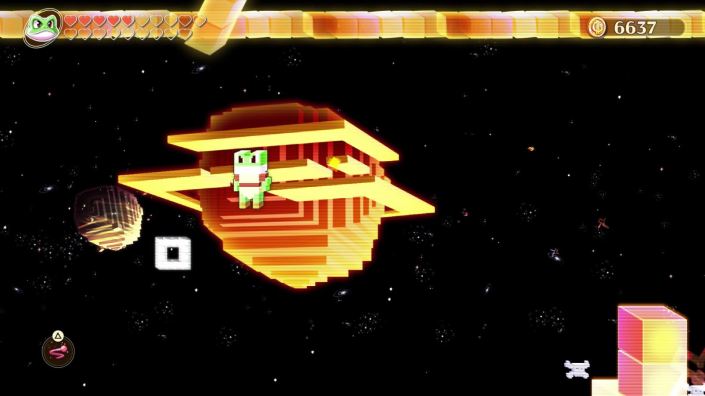 I felt that Monster Boy and the Cursed Kingdom dragged on a little bit too long. Shortly after getting your final form you won’t just head off to the final boss, but are instead first tasked to find three relics in places you’ve already been and later on in the final dungeon, you have to go back and collect all five gold sword pieces (if you hadn’t found them yet) in order to be able to complete the game. I think I would have preferred if these things hadn’t been added just to increase the playthrough time. Several times I was just bored to go back to attain items I had missed and once I finally beat the last boss without having searched the entire world for all upgrades, secrets and gear, I was glad it was over. Again, the game is really not bad, but it is definitely a more flawed experience if you hold WB3 in such high regard as I do.

I really wanted to say that this is one of those games I’d reboot every now and then and replay from start to finish, as I do regularly with WB3, but I’m afraid that Monster Boy and the Cursed Kingdom is cursed to a life in the Completed part of my library. It was fun while it lasted, but hardly the memorable experience that WB3 gave me as a young boy. You can tell the developers put a lot of love and effort into the game, but nowhere does the game exceed its predecessors. And it’s one thing to copy a game’s mechanics and rehash the concept, it’s another to run with them and create something great, or even better. I’m afraid that’s what they failed to achieve, for me at least. If, unlike me you’ve never played a Wonder/Monster Boy game before and this is your starting point, then I think you’d love Monster Boy if you’re into Metroidvania type games and I do recommend it as a game on its own. Sadly I’m too nostalgia induced to see it separate from its predecessors and that’s when the flaws show best.