When it was my birthday Bren gave me the latest game in the Pokémon series; Pokémon Shield. As usual Game Freak released two editions of this new iteration in the ongoing Pokémon games series. After completing the main story, which was surprisingly (except not really) similar to the other games, I set out to complete my Pokédex. This is the story: You’re an aspiring Pokémon trainer and you set out from your home town to challenge all eight gyms after which you challenge the local “head honcho” and become the new regional champ. Been there, done that. I really hope Game Freak will up their game a little and bring us a more original game story sometime.

Collecting Pokémon is a complicated profession…

But the story, well, that’s not really what the game is about, if you’ve played other games in the series you know that. The main goal is, of course, to complete your Pokédex and earn your bragging rights for having done so. Well, last week I finally managed to do so. Just a little after the new expansion came out; The Isle of Armor. Thankfully this new area has a Pokédex of its own, so there was no added pressure of needing to catch even more Pokémon in order to complete the “old” one.

The Galar region Pokédex features 400 Pokémon. To put things in perspective, the original games only had 150 (or 151, if you count Mew 😉 ). So completing it was easier. Well, yes, and no. There were less Pokémon to collect, but at the same time, there were also less ways to trade. Nowadays, in the age of online gaming, we have several ways to complete our Pokédex, from 1-on-1 trading to mystery trades and apps like Pokémon Home.

One of the best features of Pokémon Shield has got to be the Wild Area and the raids you can do with up to four persons. I am still raiding regularly, trying to catch Pokémon with great stats. And I’m trying my luck at breeding a shiny Mawile at the moment. Once I’ve constructed my dream team, I’m going to try my luck in the online battle league and completing the Isle of Armor Pokédex too, of course.

Eventually, I managed to complete the original Galar region Pokédex. I traded with friends, with strangers and bred several “baby” Pokémon in order to complete the Pokédex. It was a long and hard journey, but here’s my certificate and I’m damn proud of it 😛 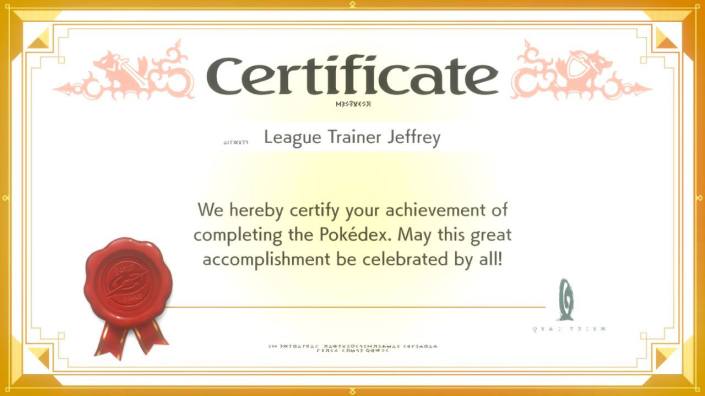 Now I’m going forward with the Isle of Armor Pokédex, which features slightly over 200 types of Pokémon. The good news is that several of them were already part of the Galar Pokédex, so that’s a nice head start. 🙂

If completing the Pokédex has taught me anything is that if you just put your mind to it, anything is possible. Even if things might get a bit boring, or tedious, or even frustrating. It is all worth it in the end. 😉