The Star Wars Celebration in Chicago is only a day behind us, and although I wasn’t there, I was watching the news closely on Reddit and social media regarding one of my biggest fandoms! 2019 looks to be one of the best years to be a Star Wars fan and here’s why!

The teaser trailer for Episode IX

After the ending of Episode VIII: The Last Jedi I was stoked to know how this new trilogy will end. I’m one of the people who loved TLJ because it was such a bold movie in more ways than one. Sure, not everything is great about it, but let us not forget how bad the prequel movies were in comparison (Episode 3 is a big exception).

The teaser is awesome. I love seeing Lando back in the Millennium Falcon! And obviously there’s a search going on. Then the reveal of the Death Star II wreckage and the laugh of none other than our Dark Lord Palpatine at the end! It gave me the chills! What does it all mean? The wait until December is going to be a long one, but thankfully we’ll have a lot to look forward to in between!

My faith in EA as a video game publisher is extremely low. They fucked up the release of Star Wars: Battlefront 2 by adding lootboxes and a pay-to-win scheme. Thankfully they later “fixed” this error and the game is now actually decent, but I am looking forward to the day when EA’s contract for Star Wars expires. Despite my dislike for EA, Jedi: Fallen Order looks promising and the trailer got me excited. I will hold on to my wallet until I’ve read the reviews later, however.

So far I’ve read that there won’t be any DLC for this game, the developer Respawn Entertainment said so on Twitter. They want to focus on this becoming one of the greatest single player Star Wars experiences. A very noble goal, if you ask me and one we desperately need. I want this game to be deliver, but as I said, I’ll wait for the reviews before spending any hard earned cash on it.

Besides Star Wars I’ve always loved LEGO and so it shouldn’t be any surprise to anyone that I am very fond of my LEGO Star Wars collection. This year marks a very special year, because it’s been 20 years since LEGO first released their Star Wars line of products. That’s why there’s going to be five special sets to celebrate this anniversary. 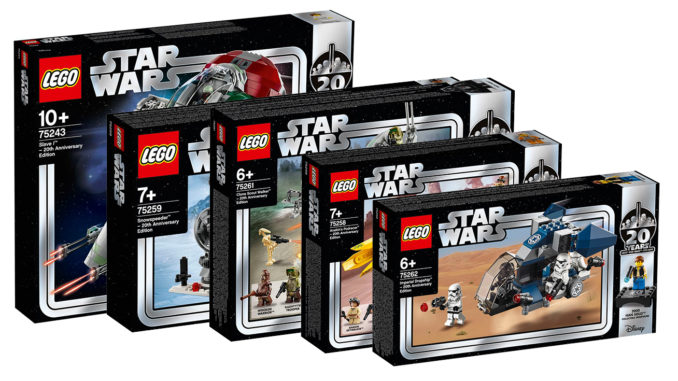 These are the boxes 🙂

And all of the sets out of the box. Anakin’s Podracer, a Snow Speeder, Imperial Dropship, Slave I and a Clone Trooper AT-TP walker!

The most expensive set is the one of Slave I. All sets come with a unique 20th Anniversary minifigure in the classic yellow-skinned LEGO style (the style the City sets still have to this day).

I think these sets are all lovely and I intend to collect them all over the year, and I’ll be reviewing every single one of them, of course! 🙂

Despite not liking the prequels that much, I do love Clone Wars, the animated series that takes place in between Episode II and III. Ahsoka especially is one of my most beloved Star Wars characters, mostly because she has such a tragic and compelling storyline. I love the book as well, although it had a bit of a slow start. The trailer for season 7 of the Clone Wars looks absolutely fabulous and I’m eager to see it!

What I love most about this is how loose ends will get tied up. We see that Ahsoka has grown older, Anakin’s hair is longer and of course we see more old favourites come back! This will be the end of the series we never got and I’m really eager to see it!

A live-action Star Wars series? Yes, please! Especially since it’s about one of my favourite subjects in Star Wars! I’ve always had a thing for Boba Fett, and pretty much all the Mandalorians. Their lore is awesome, and this series just looks great!

It’s set between Episode VI and VII, so that’s an interesting time, I think. The only thing I don’t really like about all of these new series is that they’ll be Disney+ exclusives and we won’t be getting that in Europe until somewhere next year. So in that time I’ll have to wait it out and finish Rebels, read books, build my LEGO sets, play Jedi: Fallen Order, oh and perhaps start writing my fourth novel! 😛

There’s probably a lot more news I missed, but these are the biggest things I’m looking forward to this year when it comes to Star Wars. All in all it’s set to become a great year as a fan of one of the Earth’s biggest franchises. I love it!

May the Force be with you!